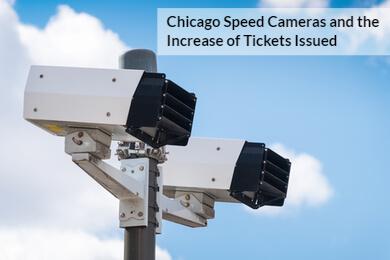 Several months ago, Chicago Mayor Lori Lightfoot ordered that the threshold for speed cameras placed around the city be dropped from 10 mph to 6 mph. Although it may seem like a small amount, that difference has resulted in a significant increase in the number of speeding tickets issued. This may be resulting in a nice financial windfall for the city, but for drivers, it has turned into quite an expensive headache, with some drivers receiving multiple speeding citations from the same camera, often within days of each other.

According to public records, there are 162 speed cameras located throughout the city. These cameras have been placed in 69 different safety zones that are within an eighth of a mile of a school or park. Fines for violations changed in March, when the city lowered the speed threshold. If a driver is speeding between 6 to 10 mph over the posted speed limit, they will be fined $35. If the driver is traveling over 10 mph, they will be fined $100.

In the first four months of the change, the city issued more than one million tickets. This was more than double the amount of tickets issued during the same time period in 2020.

The speed camera that has generated the most tickets is located in Hyde Park, at 536 East Morgan, inside Washington Park. According to city records, in the first four months of the speed threshold change, there were almost 23,000 tickets issued to drivers traveling 6 to 10 mph over the speed limit. Another 5,700 tickets were issued by that camera for drivers going more than 10 mph over.

Other high ticket speed cameras include:

In Illinois, traffic tickets for speeding and other moving violations stay on a person’s driving record for four to five years. If a driver receives more than three driving violation convictions in a 12-month period, their license will be suspended. These violations also result in an increase in auto insurance.

The important thing to remember is that losing your license is the result of three convictions, not just getting a ticket. This is why it is critical for a driver to contest a speeding ticket, even ones issued via speed cameras. Too many drivers just go ahead and pay the ticket, without realizing the potential consequences this can cause in the future should they receive another violation. This is especially important to remember with these new rules in place and the tremendous amount of speeding tickets being generated by these cameras.

If you have received a speed camera ticket, do not put your license at risk. There are several potential defenses that a skilled Chicago speeding ticket attorney can use. Call [[title]] today at 312-861-1084 to schedule a free consultation and find out what legal options you may have.